skip to main | skip to sidebar

I didn't go with Spec and Perry this week to Rockko's, instead we went to
a waiting room for a friend.
So what do you do while you wait?
I sketch the patients.... 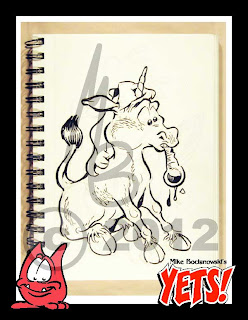 I found out that you can't give unicorns thermometers because they chew on them. 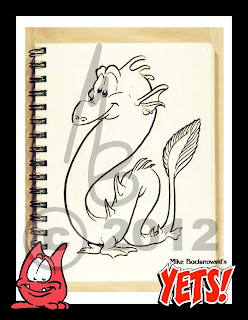 This Yet slithered in and just needed water.
Posted by Mike at 10:44 AM No comments:
Email ThisBlogThis!Share to TwitterShare to FacebookShare to Pinterest
Labels: sketchbook

It was another night of dancing at Rockko’s, I didn't stay long
and I decided to focus on a clowder of cats that
were having too much fun swing dancing. 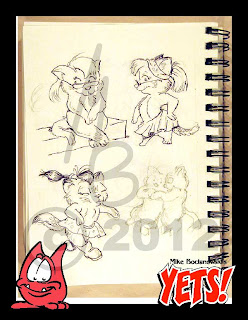 It was a snowy night and the cat at the bottom-left actually bust out a Charleston move in her snow boots!
The one at the top-right saw me drawing so she posed for me. 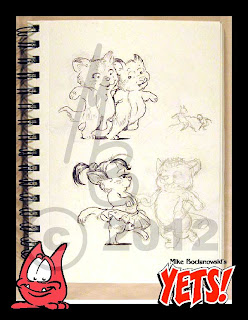 You can see the two at the top were enjoying doing the Charlston with each other.
I’ve got more drawings of Rockko and I’ll post those when I get a chance.  I’m very fortunate to have friends like Perry and Spec who invited me out to this place and to Rockko who let me sit in the corner and draw
(I’m one of the few humans there…).
---on a serious note though:
I do these drawing exercises because I live in a smaller town away from the bustling big cities and I don’t have the resources that artists have in Los Angeles, NYC or, Toronto.   Sometimes it is tough to be inspired.
Those cities have free (or cheap) weekly figure drawing sessions, if not daily, and you have other artists from major animation, comic book companies to hang out with.
So I follow what my heroes (like Chuck Jones, Jack Kirby, or James Gurney) did.
They drew.
Nothing magical, nothing instantaneous, nothing complicated, nothing expensive.
They drew constantly.  They were almost attached to a piece of paper and pencil.
They observed the world, and recorded it on paper.  They challenged themselves.
So, like any good athlete, I keep training.
I admit the swing dancing cats aren’t a big creative leap, but
they were tough to draw because they move so fast….
and the one cat didn’t really stop and pose for me, she just walked by and
I had to capture how cute she was in her babushka, glasses and skirt.
Also by going places and drawing, I make just as good friends as I would make anywhere else,
even better.
Posted by Mike at 3:57 PM 1 comment:
Email ThisBlogThis!Share to TwitterShare to FacebookShare to Pinterest
Labels: sketchbook

Sir Perry and Spec invited me to a place in the TreeWorld named, Rockko’s and on Thursday nights, everybody in the area come to dance. All classes of critters come to Rockko’s and I am one of the few humans allowed to be there (thanks to Perry’s endorsement…) to record the fun. 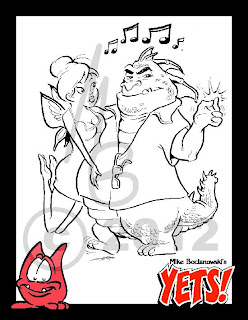 Rockko is a Yet and the owner of the establishment and you can find him dancing with the prettiest fairies.
When I go I’m going to focus on a particular animal and try to draw them interacting (there are so many that show up to dance!) and perhaps as I am accepted into the group, I will be allowed to draw the Yets dancing as well.
Last night I focused on a herd of rabbits. 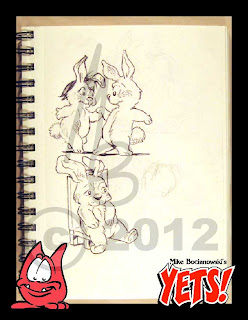 There wasn't many girls there at first, so the guys were bored and sitting around. 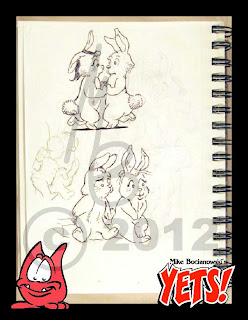 I was told I can tell which are girl rabbits by their long hare. 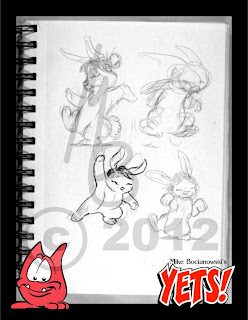 There is always one professional dancer and she liked doing the Charleston.
It's tough to draw things that are moving! Rabbits and dancing made it exceptionally difficult!
I always have my small sketch book and my ball point pen and
I encourage you to carry pencil and paper just to record what you see.
You don't have to draw, you can write stories, poetry, music
whatever inspires you.
Just have fun.
I'll post more each Friday until I have some pages done for the new YETS! story
and then I'll post those pages.
Posted by Mike at 9:48 AM No comments:
Email ThisBlogThis!Share to TwitterShare to FacebookShare to Pinterest
Labels: Dancin, Hidden Meanings 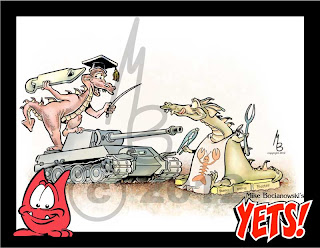 Here is the finished painting.
Posted by Mike at 8:02 AM 3 comments:
Email ThisBlogThis!Share to TwitterShare to FacebookShare to Pinterest
Labels: Origins Game Fair 2012 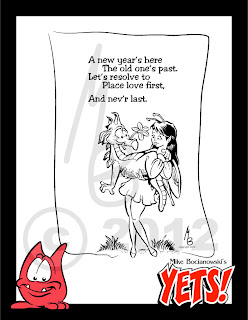 Friends of The Yets